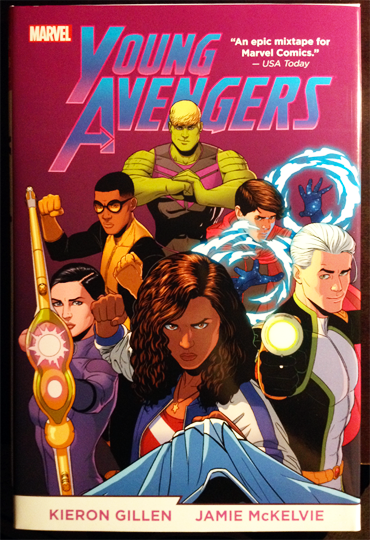 I’m not generally a fan of the Young Avengers. In fact, before this series I absolutely hated the team and characters.

I never really understood the big draw to them and the Runaways. I mean I understand that they are written to seem like authentic teenagers, but I guess I just don’t understand why anyone would willingly want to listen to realistic teenage dialogue. Maybe people who are still teenagers find it refreshing, but I don’t particularly enjoy reading a bunch of overemotional whining about beyond-trivial clique politics and misguided infatuation. I gave this version a try anyway though, because it’s Kieron Gillen and I had faith that he would do something a lot more interesting than that, and he did. Gillen ditches the angst and instead produces some stylish and well-crafted dialogue, which may not be as “authentic” coming out of a teenage mouth, but it’s sure a hell of a lot more entertaining to read. McKelvie’s art is a perfect fit with Gillen too, as usual, and together they manage to make these mostly previously unlikable characters (Gillen even slips in a few jabs at how childish and silly the Young Avengers, in their original form, were as a concept.) seem hip and interesting without resorting to what seems to be the new trend of indie-fying unpopular characters by giving them fashion designed costumes and trying really hard to copy the tone of Fraction’s Hawkeye.

There are downsides here though. For one, this series just kind of assumes that you know who all these characters are. Not really a problem for me, but people who aren’t familiar with the Young Avengers, their semi-obscure new members, or everything that happened in Gillen’s previous Journey Into Mystery series, which ends up being pretty heavily referenced here, may be a little lost at times. There is also that nagging sensation that the series ended before it was ready. Things are wrapped up in a bit of a rush, and while Gillen recovered nicely from a sudden cancellation and still managed to finish off the plot in a mostly satisfying manner, you can still tell that there should have been more to it than there was. Also…this “omnibus” is pretty overpriced for its size. 15 issues for $50 is a pretty bad deal, even if it is a nice oversized hardcover package. I’m a big Gillen fan so I didn’t think much of it, but others may want to consider going for some cheaper paperbacks if they’re unsure about it. Overall, I wouldn’t really call it one of Gillen’s essential works like Journey Into Mystery (though for big fans of that, it does serve as a nice little bridge in the gap between JIM and the current Loki series), but it’s a good little bit of fun while it lasts and all these new “tumblrized” superhero books, as the kids these days say, could learn a thing or two from this book.