Axiom Verge is yet another of those Metroidvania games that I like so much. This one is especially patterned after the early Metroid games, which you can tell pretty easily just by looking at it. The design is almost plagiaristically similar to Metroid and Super Metroid in the early levels.

It quickly becomes its own thing though, with some interesting new mechanics, a huge arsenal of weapons and skills, and a pretty large world to explore for this type of game. Interesting skills like the remote drone, which basically replaces turning into a ball, help it stand out from being just a complete Metroid clone.

The game also has a pretty catchy, fitting soundtrack and of course, many big, bad bosses for you to beat up.

Despite being a very fun and faithful Metroid tribute, it did have a few annoying little flaws though. For one thing, the controls, the weapon switching and assigning in particular, can be pretty flaky. More importantly though, that huge world has no travel system of any kind so you’re going to to be spending a pretty good chunk of time manually running back and forth across multiple areas over and over again, especially if you’re the type that wants to hunt down all those sweet, sweet secrets. Speaking of secrets, there are some seriously pain in the ass secrets to find in this game too, with no real indication at all of where they might be sometimes. You absolutely will not find everything on your own without using a guide because there will always be some kind of ultra obscure thing hidden inside an intangible piece of wall in a random alcove somewhere or some things that you can clearly see, but find no way to get to. Sometimes it will just turn out that you don’t have the skill needed to get to it, but other times it will turn out that you need some obscure password to enter into the password device. Yes, you have a little password device that looks just like the one in the original Metroid that you can enter passwords into to achieve various effects. Sometimes it can be used to amusing effect like if you happen to remember the famous special password from the original Metroid…

…but other times it will turn out that to get just one of the extra elusive secrets you would have had to have found all the right hidden text documents, and not just the ones with the hints to passwords to open the secrets, but you’ll need to have found the ones that can decode the alien language that it’s probably in too, and it can get even worse when you run into something like: 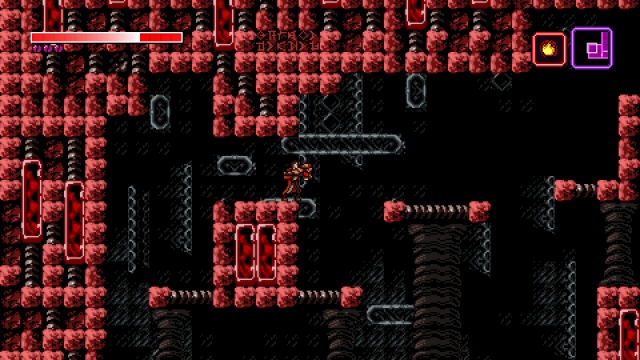 Oh, do you not see the secret there, bro? I mean it’s so obvious that those scratches up at the top of the screen are actually an alien language that you have to somehow manually translate using bits and pieces you’ve found from other hidden documents, which I hope you didn’t miss any of, which of course gives you a password that serves no other purpose but to open a single passageway that you have no way of knowing even exists so that you can find one item. Even after going through and clearing what I thought was everything out, using a guide to find the most obscure bits that I couldn’t find, I still ended up with 99% total items, even though all the maps showed I had gathered all the items in them, because apparently there is one “heart piece” that you can only get by using the weird glitch gun on a specific rare enemy. These guys can be found in 3 different areas and it’s completely random which one of them drops it. I didn’t find this out until after I had finished the game so I just said fuck it, I’m not spending another hour running around looking for that one more item, I’m done. Argh.

Anyway though, complaints aside, it was still a lot of fun more often than it was not and kept me coming back for more. If you can accept the flaws that being a little too similar to the rough-edged original NES Metroid bring with it, it does have a lot to offer for fans of the Metroidvania genre. Overall I give it 4 crazy evil future versions of yourself that you must kill for…reasons out of 5.