This has been hyped as the #1 game on Vita by just about every place I’ve seen. It sure looks fun. Lots of relatively nice looking and explosive combat against crazy horror-ish monsters. Even though it’s apparently a Monster Hunter clone, doesn’t this look fun? 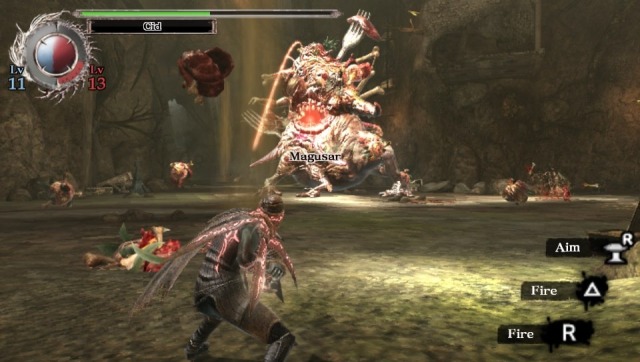 I tried and tried to get into it, but it’s just a frustrating and boring game. Combat is really simplistic and unpleasant, mostly consisting of too-easy button mashing in the normal levels and a lot of running around in circles picking off minions to recharge as you painfully slowly pick away at bosses in the harder levels. Oh sure, people will try to tell you there’s all this strategy to it, but that’s not really what’s going on here. If you know about a bosses specific weakness you can exploit it, but once you start a level you’re stuck with the spell loadout you picked so if you don’t just happen to have the right kind of spell, you’re just going to have to die and come back and do it again with the right one or have looked it up beforehand. There’s nothing strategic about any of that. There are a lot of different spells for you to find, but most of them are really just variations of the same handful of spells, just with different status effects on them, and a lot of them just feel really weak and ineffective. So it’s just a lot of button mashing and/or grinding and the combat system isn’t even close to fun enough to make all the repetitiveness worthwhile.

This being a Monster Hunter clone it naturally has to explain its gameplay mechanics to you as poorly as possible. Sure they tell you the bare basics, but you soon find out that all these poorly explained stats and keywords are just going to keep coming up, though none of them seemed particularly useful, so you’re just left to either ignore them or go look them up online, neither of which is at all appealing to me.

Then we have the level structure, which seemed so interesting at first, with you having to use this living book and go inside the memories contained within to do missions against various monsters, but the story only really consists of a few sentences of not particularly interesting text between each mission, and you’re limited in what missions you can access until you’ve beaten certain chapters, so if you get to a point where you have no available missions left except one that’s above your ability to complete, naturally you’re just going to end up having to go back and grind the same old boring too-easy levels just to power up enough to progress. Fuck noooooooooooo.

I unlocked some kind of rumor marketplace too where you can buy and trade for rumors, which are supposed to add bonus effects when applied to missions or something, but I have no idea if I actually need any of the parts it wants as payment and it does such a shit job of explaining what the effects of the rumors were that I had no idea how I was supposed to use this to benefit me other than again, going online to research it I guess. No. Fuck you. I’m not going to go hunt down and read user-written game manuals to learn how to better exploit the broken mechanics of your shitty fucking game. Get the fuck outta here. I quit.