This game by the same creators of Binding of Isaac, is often described as one of the most sadistic games ever made. Surely this must be an exaggeration, right? It can’t be THAT bad. 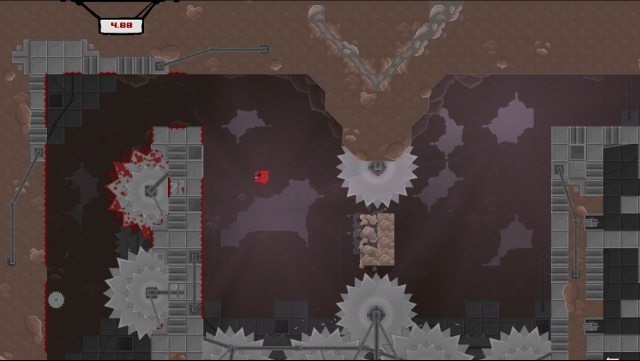 Screenshots don’t really do it justice. This is the ultimate test of twitch-based, muscle memory building, “hardcore” platforming that will not just pain you mentally, but physically as well. You absolutely will hurt yourself playing this. Never in my life have I played a game that worked my hand muscles so hard with so many constant, repetitive, super fast, and ridiculously precise movements. I had to put the game down for 2 days because my hands were so cramped and my right thumb was so near blistering. IT WILL FUCK YOU UP, BRO! The only thing that saves your sanity is the fact that most levels take under a minute to complete successfully, so you don’t really lose any ground when you die. You just pop right back up and try again instantly. Don’t think that that means you’ll only be spending a minute on most of them. You will die. A LOT. I think I  had something like over TEN THOUSAND deaths by the time I finished. I don’t even know how that’s possible.

It was fun though, really. It was challenging, rewarding, and the simple, but pleasing visual design, packed full of retro NES references, was quite nice. I didn’t realize how many characters and bosses from Binding of Isaac were actually returning characters that first appeared here either. It actually made me want to go play some Binding of Isaac again (which I think I will do one of these days. I still need to check out Afterbirth after all…). It was a surprisingly long game too. There are almost 300 levels all together. That said, after having finally beaten every rectum-clenching level, I don’t think I will EVER play the game again. It was a nice experience the one time, but I just don’t think I could do that to myself again.