Contra madness continues with the next generation of Contra on Playstation 2. 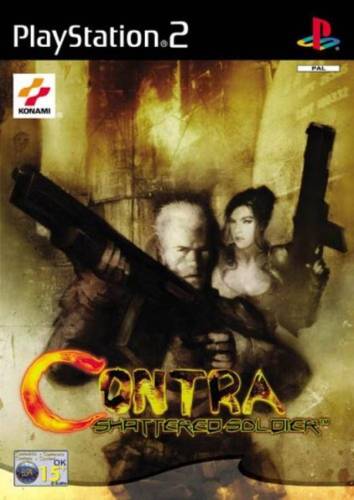 Contra finally becomes Contra again with Shattered Soldier. SS is very much a Contra title again, unlike the weird PS1 entries, full of crazy sidescrolling action and a shitload of bizarre and challenging bosses. This game actually looked really good for a PS2 game and the level and boss designs were impressively twisted, often seeming almost like a horror game, at least in appearance.

The downside is that they start throwing the difficulty in your face a bit too much. If you play on Easy, you get 99 continues and more lives for each one, but you can only play up to mission 5 out of 7 before the game tells you “TOO BAD TRY A HARDER MODE.” Normal mode only gives you 3 continues and 3 lives each time, which is bad enough on its own, but what the game doesn’t mention is that you can’t actually get to mission 6 and beyond by just playing on normal, you also have to have an overall rank of A when you beat mission 5 (and if you do it with less than an A, a satellite beam weapon actually blows up the entire island you’re on, with you still on it). To do this, you have to pay attention to the new “Hit Meter”, which keeps track of how many things you’ve killed during each level, and get it to about 90-100% every level. To do that, you have to kill not just every single enemy you see, but every single part on multi-parted bosses, i.e. you can’t just shoot the core to blow up evil robot, you have to shoot off its gun and its arm and its leg and etc first. Or sometimes there will be enemies or bosses that will just plain walk away if you don’t kill them quickly enough, depriving you of their points. Or sometimes YOU DON’T REALIZE THAT FUCKING SANDBAGS COUNT AS 1% EACH BECAUSE YOU’RE NOT AN INSANE JAPANESE GAME DEVELOPER OUT OF HIS MIND ON MUSHROOMS!

Yeah. Fun game though. Just don’t expect to see those last two levels, which also carry all the cutscenes that actually explain the previously incomprehensible plot (because Contra suddenly has a plot now, apparently), without hours and hours of training and grinding, or just cheating the hell out of it. Let me save you the time and tell you the secret now…your bosses actually lied to you and everything since Contra 1 has been because they stole a special, magic artifact from the aliens, and they’ve just been trying to get their stuff back all this time. WE were the invaders all along! IT WAS ALL FOR NOTHING! SURPRISE!

Neo Contra, despite sort of continuing the plot from Shattered Soldier, changes the tone and the gameplay almost entirely. The game is now entirely a top-down shooter…but at kind of a 45 degree angle? With most of your movements and aiming being in diagonal directions, despite the controls still operating on a standard X/Y axis, and the fact that you can’t aim without moving your whole character, it makes things slightly awkward. You can only really deal with it by holding down the aim lock button constantly and just moving your field of fire over the enemies instead of trying to actually aim directly at them. The game still manages to be playable and fun despite this though, amazingly.

The story has given up entirely on being serious or making much sense. Everything is even more over the top than ever, with you dealing with nonsense like talking dog bosses or playing a level while running on top of the blades of a flying helicopter. The story has an odd feeling to it, with its many goofy cinematics, featuring strange superpowered boss characters that feel like they were either trying really hard to be like a Hideo Kojima game or purposely mocking that Kojima style, I’m really not sure which. It’s certainly an interesting experience though.

It’s also a bit easier than Shattered Soldier, but it still uses the same system of Hit Rating and not being able to play the last 2 levels without having an A rank on Normal mode. Once you beat mission 5 once though, you unlock Weapon Set D though, which makes blasting through the game with an A rank ridiculously easy.

P.S. OMG YOU’RE SECRETLY A CLONE OF YOURSELF WHO IS BATTLING AN EVIL AI CLONE ALSO OF YOURSELF WHO SAYS THAT HE IS THE ORIGINAL BUT IS ALSO NOT? I don’t know. Who cares, it’s all forgotten in the next game anyway.

Contra 4 is not exactly a direct sequel, maybe? It’s part sequel, part remake, I guess. There is some completely new content, but most of the game is made up of extreme versions of classic levels and bosses from the first 3 games. Most of it is based on the original game, so I can’t really complain about that. EXTREEEEEEEEME ORIGINAL CONTRA! Again, it’s extremely difficult, but not impossibly so. There isn’t really any story in this one anymore except for a blurb at the end that tells you that this has been the end of the alien wars and that the aliens’ motives were never made clear, so I guess nothing between this and 3 counts anymore? Except Hard Corps maybe? Because wasn’t the final Contra game a prequel to Hard Corps? I don’t know. Who the hell plays these games for the story anyway?

Only bad thing about this excellent game is that it was on DS and so it decided to be clever and have the gameplay spread across both screens at once, and while an expanded vertical screen seems like a good idea in theory, there is that big gap between screens where the hinges are, so there’s a huge fucking blind spot between screens that will probably be responsible for most of your deaths as bullets and enemies come flying at you from the opposite screen at weird, unexpected angles. You kind of get used to it, but it’s a little annoying. Still one of the better Contra games though. 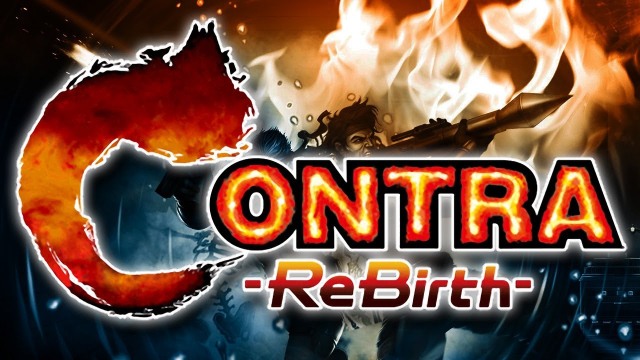 In 2009, continuing the trend of being completely fucking unable to to stick to any one system or to be properly cross-system, Konami decided to make the next Contra a downloadable game for the Nintendo Wii. This is a weird little game. It’s incredibly short and basic and it has the kind of plot where you can tell that the devs clearly went “Hey what’s the story for this one?” “I don’t fucking care, just finish the game so we can sell it”. Lance is now a crossdresser who picks you up on the moon in a helicopter because why even bother trying at this point?

I don’t know. It’s a decent game. Probably the easiest and simplest game in the series since the NES, but without any of the charm that made the original so memorable. I’m not sure why it’s “Rebirth”. It’s not a remake or a reboot. I guess it’s supposed to be a homage, but Contra 4 already did that and did it much better. Oh well.

P.S. Wow I forgot how awkward and uncomfortable it is to play games with a sideways Wii controller. Fucking rough corners and battery cover latch digging into your hands and the geniuses behind this game forgot that there aren’t enough buttons when using this mode and so instead of using an L/R button to lock your aim, you get to use what is normally the trigger button on games that use upright Wii controls, but here you have to super-awkwardly mash it down with your knuckle. Good old modern day Nintendo design at work.

Apparently a remake of the original Contra came out back in 2010. I never heard about it, and now I can see why. It’s a port of a shitty phone game that feels like some kind of Chinese bootleg of Contra. Yes, technically speaking the graphic technology has improved, but the new models are just ugly fucking lumps that somehow end up looking worse than the 8 bit versions. I couldn’t even finish it, it just made me angry seeing the original Contra remade so badly.

Yeah, you know what? I’m not even going to bother. I don’t want to give Konami another $15 to play some half-assed non-Contra Contra game that looks like it uses the same engine as Contra Evolution and that they had such low confidence in that they couldn’t even put the Contra name on it. I’ve had enough.

RIP Contra. Your glory days will never be forgotten, no matter what miserable free-to-play-online-pachinko monstrosity Konami turns you into next.