Speaking of virtual multiverses, What If? was an ongoing series that featured a different alternate reality every issue, usually with the theme being that everything in a given famous storyline went horribly wrong, and usually in an unexpectedly dark manner. There were a surprisingly large number of great issues of this back in its prime, especially when you consider how they had to keep coming up with a whole new one of these every month. So in chronological order, here are some of the best issues before the dreaded mid-90’s came along and ran the series into the ground like it did everything else. 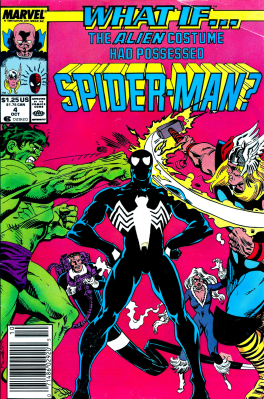 What if the alien costume succeeded in taking control of Spider-Man instead of being cast off to later become Venom? Well, naturally it would lead to a crazy, evil Spider-Man who gets wrapped up in some wacky shenanigans that ultimately lead to a horrible death and the symbiote jumping ship and taking over Hulk, and later Thor, before finally being stopped. It’s not the most well-written of the bunch, but you can’t help but be excited by the idea of Venom-Hulk and Venom-Thor (well, at least I can’t)! 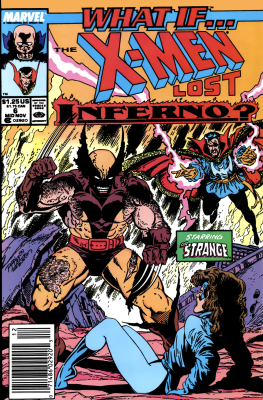 This is where there series really started getting grim. The X-Men lose Inferno, which results in them all dying horribly except for Wolverine, who wins the bonus prize of becoming the new possessed champion of the demon invasion. He then proceeds to slaughter the shit out of the rest of the Marvel universe, only taking an occasional break to eat some babies. That’s not a joke, he literally eats a baby. COMICS, KIDS! 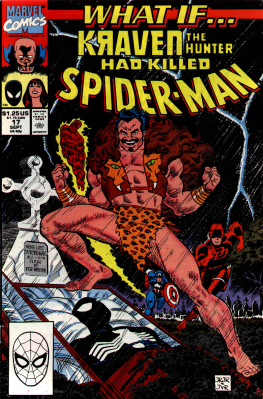 Next we have another Spider-Man issue (there were quite a few Spider-Man issues, as you’ll see). This time featuring the famous Kraven’s Last Hunt story, but this time instead of drugging Spider-Man and killing himself at the end, Kraven just kills Spider-Man and goes on a crazy rampage, ending with his insanity becoming so great that he actually starts eating Spider-Man‘s corpse, thinking it will give him spider-power. Also, from the look of that cover, he probably teabagged the corpse as well. 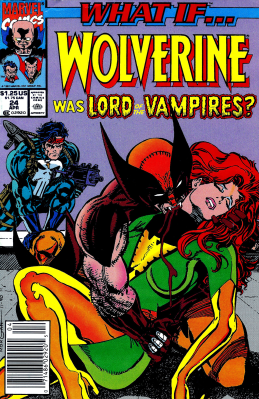 Here we have another tale of Wolverine becoming a monstrous mass murderer, this time by becoming the new Dracula. He does this by getting bit by Dracula and then overpowering him, which you would think by comic book vampire logic would cure him, but no, he just kills the shit out of everyone again. Wolverine gleefully turns all the other mutants into vampires and they pretty much take over the planet until Punisher, who has now become the new sort-of-apprentice of Dr. Strange because there’s no one better left alive, has to fight his way through all of them by himself and snatch the Darkhold to make everything better through the power of magical genocide. Yep, the ultimate spell destroys all vampires, so now all the heroes and mutants are dead. Another cheerful ending for everyone! 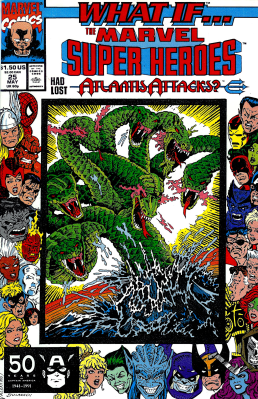 Atlantis Attacks was all about some underwater jerks trying to bring the elder god Set back to life so he could eat everyone that hadn’t already been turned into a snakeman. Once again we see most of the major heroes die almost immediately, with the only hope left resting in the hands of an oddball group of random heroes and villains. The survivors are forced to fight and kill all their other surviving old buddies who have become snakemen. Then Set himself drops by and says “FUCK YOU GUYS, I’M HANGRY!” and things don’t go too well for anyone. Set ends up being banished in the end by a convenient plot device, but not before he left behind a bunch of Set babies, who end up eating everyone else anyway, making the vampire world from the previous issue look like they had it good.

This one had two stories about Reed Richards’ daughter surviving, one where she’s good, and one where she’s a horrible H.R. Giger-looking monster that sucks the lifeforce out of all her friends and family until her brother Franklin is forced to team up with Dr. Doom to stop her. This time the good guys save the day and there’s a happy ending for everyone! Just kidding, they all die again. 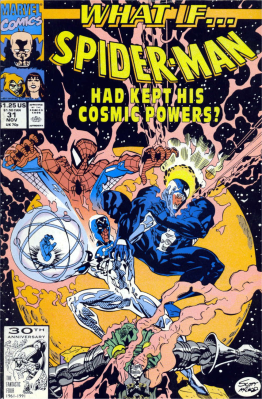 Another Spider-Man one. This one was actually pretty positive, surprisingly. Yes, he gains godlike power, does weird things to his enemies, gives Aunt May a heart attack, and alienates the hell out of his wife and friends, but amazingly he actually doesn’t go on a murderous rampage and even survives in the end. 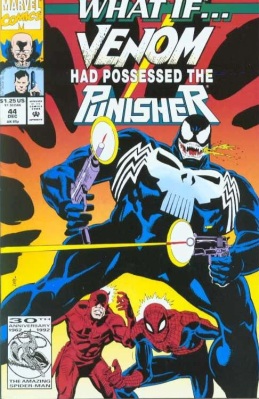 COME ON! WHO DOESN’T LIKE VENOM-PUNISHER? Oh. Was it just me? Oh well. What can I say, I was crazy for Venom back in the day, so I got excited by anything remotely like this. The story still holds up pretty well today though. 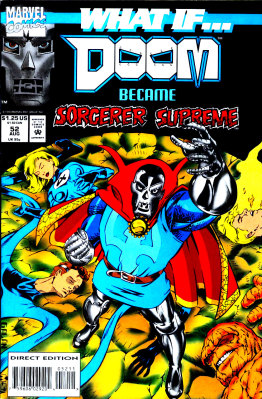 Here we see what Dr. Doom would have been like if he was Sorcerer Supreme instead of Dr. Strange. Naturally, he’s still a complete asshole, but it made for a pretty interesting story, watching him crush his enemies by combining science and sorcery in such devious ways. 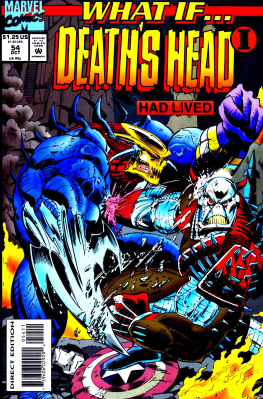 And finally there’s this one. Death’s Head II was one of the grimmest, most XTREEEEEME things around back in the early 90’s. He was kind of like what would happen if Venom and the T-1000 had a baby that was also British. Again, his comics still hold up pretty well even now. That brief 90’s wave of Marvel UK books was really good in general actually. Point being, this issue had Death’s Head, Death’s Head II, and a crazy story where almost everyone dies again. Noticing a pattern yet?

Anyway, I hope you’ve learned a thing or two from all of this, like don’t let Wolverine babysit your children,  don’t pick up and wear any strange alien costumes, and definitely don’t summon snakey elder gods to this plane of existence no matter how fun it sounds.

One comment on “The best of classic What If?”