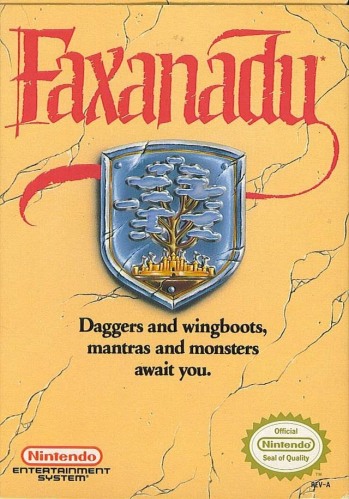 Faxanadu is probably the greatest lesser-known NES game out there. I suppose it was the bad marketing that caused its obscurity. I don’t remember there really being much in the way of advertising for it, the box art was extremely bland and uninformative, and what does that name even mean? Seriously, what is Faxanadu? It’s never even mentioned in the game!

There’s a great game behind the boring marketing though. I got lucky and a kid I knew told me about it and let me borrow his copy or I’d probably never have tried it. It turned out to be a really cool side-scrolling action-RPG. 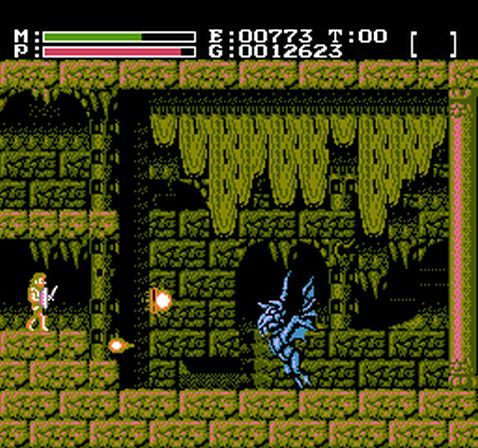 Faxanadu gives you a pseudo-open-world experience, where you can explore back and forth along the whole map. You can go all the way back to the first town from the last if you really want to, though there’s really no reason to. It’s all a lot more linear than it pretends to be, except for a few forced backtracking moments later on in the game, I guess. It kind of resembles Zelda II, where you’re constantly fighting your way to the next nasty dungeon so you can kill the next nasty boss so you can get the next weird item you need to get to the next nasty dungeon, just without the overworld map.

Boy, I forgot about that part near the end where you need three K keys to get to the next area, but the nearby town has no key shop and so you have to run all the way back to the previous town to buy them, then when you get through to the last town they tell you you need to go back to the previous town to get a ring to unlock the final area, and you really better hope you don’t forget to bring another three K keys or you’ll have to do that part over again too. Annoying, but luckily this is not a typical situation in the game.

No, for the most part Faxanadu is quite fun, with interesting locations, a large variety of weird monsters to fight, and a great soundtrack. It still holds up pretty well even today too. It’s only around 8 hours long and it’s not really the kind of old RPG that you’ll need to make your own maps for (though you might be tempted to for the final dungeon). I’d definitely recommend it to anyone who likes NES games.

One other interesting thing to mention here: after all these years of playing this game, I only just recently found out that it’s actually a spinoff title of a weird, but huge Japanese RPG series, Dragon Slayer. It’s a pretty huge series, most of which hasn’t directly released in the US, though there have been a few other entries that made it here, like Legacy of the Wizard on NES and Sorcerian on Genesis, which I had no idea were part of a larger series either. The Dragon Slayer series also spun out into another series called The Legend of Heroes, which is apparently still going today. It’s all a bit convoluted and confusing, but still, interesting stuff.