I was getting a little worried about this one after the underwhelming Telltale’s Guardians of the Galaxy, but it looks like that was just a weird anomaly. The Enemy Within shows that Telltale has still got it.

This latest season of Telltale’s Batman continues along the same lines as the first, throwing huge chunks of the standard comic book continuity right out the window, yet still retaining what feel like faithful essences of most of the familiar characters. The changes will surely be anger-inducing to some tight-assed continuity cops out there, but personally I liked that it was all so new and unpredictable.

This one brings a lot more familiar characters into the mix than the previous game did. A large handful of famous Batman villains make their debut again here, with a few of them receiving some modernized looks and a bit more of a brutal edge. We also see appearances by some other famous DC characters and some interesting new characters. I think that just about all of them were pretty well done except for Commissioner Gordon, who comes off like some needy jilted ex-girlfriend in this season for some reason.

“Oh, Batman! You cooperating with the feds instead of calling me has really hurt my feelings! So much so that I’m going to go try to arrest your friends if you don’t pick me next time!” This is an actual situation you’re forced to deal with. Gordon just acts really weirdly childish sometimes. Oh well. 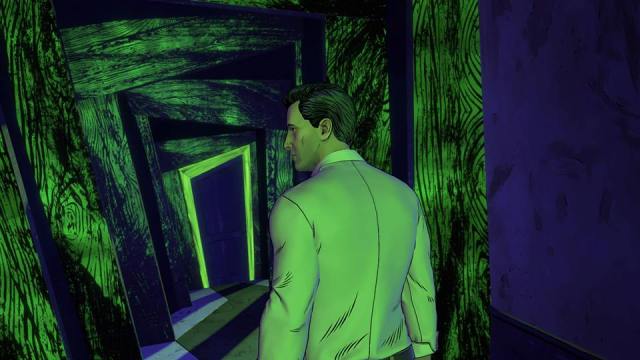 I think we all know who the real star of the show here is though. The Enemy Within presents a truly new and unexpected portrayal of The Joker, one that wants to offer you the opportunity to live out what is surely one of Batman’s greatest dreams, a chance to try to redeem the man who will become The Joker before he fully becomes The Joker. While there’s a lot more to the plot than just this, it definitely overshadows everything else as the game constantly toys with your emotions by seeing how far it can push you in your quest to save “John Doe” before he goes too far.

I mean aside from all the other times the game toys with your emotions by forcing you to make impossible choices that almost always result in pissing one ally off to please another. You know, standard Telltale formula stuff. Sometimes I feel like I should be a little offended now that I’ve played enough of these games that I can figuratively see the wires propping everything up, but the story here is so compelling and engaging once again that I just can’t seem to stay mad at its manipulative nature.

Sometimes it does make me wonder a bit though. In the first season a lot of people thought Alfred was going to turn out to be the secret villain because he seemed to have a penchant for subtly pushing you into performing certain actions that usually ended up getting you into trouble or which seemed deliberately designed to make you overlook certain pieces of evidence. So was that all done just to make him a red herring and/or to artificially progress the plot in certain points or is there really something else going on with him? It’s so hard to tell, and even now after seeing him do the same things throughout this season, I’m still not sure what to make of it (I still have this sneaking suspicion that Alfred is going to turn out to be secretly evil and behind the whole “Batman’s parents were secretly criminal overlords” thing that came out last season. Maybe next season…).

Sometimes characters really do turn out to be secret manipulators, while others like Gordon seem to be made to act like jerks for no reason other than to generate conflict. It makes for some really unpredictable plot twists, but can also feel a little annoying sometimes. Not so much that it stopped me from enjoying the game though. No, I’d still say that Telltale has another winner on their hands here, and I’m looking forward to seeing what crazy shit they come up with in the next season of Batman.

5 comments on “Now Playing: Batman – The Enemy Within”