Hollow is a recent indie horror title that I’d actually tried to play before on PC, but couldn’t because either my PC is just too ancient now or this game is just incredibly poorly optimized (or both). Once I heard a Switch port was coming, I thought that maybe this would be my chance to play this cool looking game properly, and I guess I got so excited about another new horror game that I ignored all the glaring warning signs that should have told me this was not going to be at all as exciting as it seemed.

Spelling errors on the main menu. Off to a great start.

I didn’t research this port as much as I should have, or I’d have noticed the significant drop in visual quality in the Switch version. I ignored the mostly negative reviews because it seemed to have enough apologizers that maybe there was still something worth playing here despite it allegedly being a boring, clunky mess. I definitely noticed that the game has been on sale for 50% off THREE times already since its release, starting on the first week after its release, as if they just can’t get rid of the damn thing, but I bought it anyway because I’m a sucker for trashy horror games. 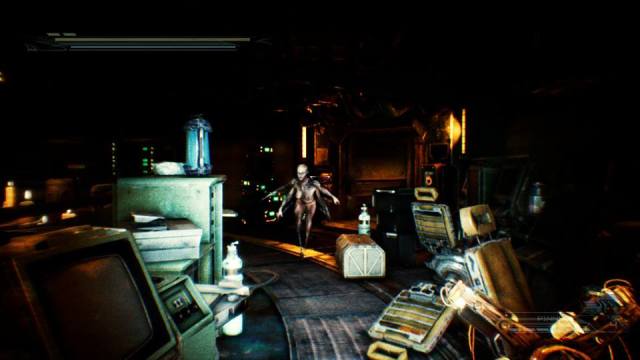 This is actually one of the less blurry/grainy shots

I convinced myself that even though this game is blatantly just a poor man’s Dead Space, it might still be fun for a few hours. I was wrong. Couldn’t even get through the whole 2-3 hour game before turning it off out of sheer boredom and annoyance.

There’s just so much wrong here. The story is almost non-existent and near-incoherent. The UI is a mess, with a HUD that you can’t even read half the time because it’s blending into the background so often and a map that’s so badly implemented and permanently too-zoomed-in that it might as well not exist.

The fucking movement speed with it’s run being a very slow walk and it’s walk being a fucking crawl. The utterly generic combat that so clearly wants to be Dead Space and Silent Hill, but just doesn’t have what it takes. The fact that they went absolutely nuts with the lack of lighting and constant increasing graininess filter to cover up how bad everything looks in this port.

This game has probably the worst visibility I’ve ever seen in a game, it’s just a sloppy mess of darkness, graininess, and blurs as you walk down what look like the same 3 corridors over and over again, fighting the same 3 enemies over and over again. Even worse, you have this flashlight that actually MAKES IT HARDER TO SEE. THE FLASHLIGHT. MAKES IT HARDER TO SEE. How is this even possible? It just causes this intense glare on certain surfaces, which I guess is supposed to be a reflection of the light, except none of the surfaces seem to be particularly shiny. In fact, it will even happen on nonsensical objects like trees. Yes, if you have your flashlight on and you look at a tree the reflective glare is so bright that you can’t see, you know, just like in real life. 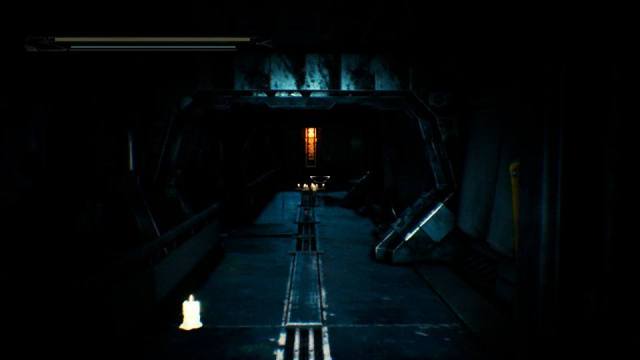 Sure is dark in here. Oh, who cares…

Soooo…yeah. Not a fan of Hollow. I’d like to say that I learned a lesson here about not being so desperate for more new horror games that I allow crap like this to slip by, when all the signs pointed to it being garbage, but I already ignored all the awful reviews for Agony, ordered a copy, and am probably writing a review about how terrible it is as you read this, so I guess I haven’t learned shit. OH WELL!