Always meant to get around to reading some more Clive Barker, and after finding out how many sequels and spinoffs there now are to the original Hellraiser story it seemed like the right time to finally do so.

The Hellbound Heart is the original story that led to the creation of the movie Hellraiser. I was surprised to see how closely the movie actually follows the book. Other than a few minor changes and an extended opening sequence, the two stories are nearly identical. The most notable difference would have to be the fact that the infamous Pinhead was very different in the book, being described as having jewels on all their pins and the voice of a little girl. It’s implied that they might even have been female, but it’s never really made clear. In fact, he/she/it is no more than a background character that only had about 1-2 pages devoted to them. The “main” cenobite in the book had a very different look, though they used many of the same lines that would become famous quotes from Pinhead in the movies.

While the overall story was very familiar, almost too much so, it was still a good read due to Barker’s disturbing descriptions of Frank and the cenobites. As cool and iconic as the movie versions were, the way the book versions are described are even more creepy and graphic.

Next was Hellbound Hearts, which isn’t really a sequel, it’s a collection of short stories by various horror writers/directors/actors such as Mick Garris, Mike Mignola, Neil Gaiman, Nicholas Vince, and many more. Instead of continuing the story of Pinhead and friends, each story takes a look at completely different devices that are used to open different portals to hell, each with their own new and different cenobites. With 21 different stories by 21 different authors, of course the quality varies quite a bit from tale to tale, but there were only one or two stories among them all that I didn’t really like. Aside from those they all ranged from decent to amazing and overall I’d say it’s a great read for anyone interested in the Hellraiser universe.

This is an odd one. The Scarlet Gospels is sort of a sequel to The Hellbound Heart, except it’s really more like a sequel to the Hellraiser movies since it uses what’s basically the movie version of Pinhead. It’s also a crossover story with another character of Barker’s, Harry D’Amour, probably best known from the movie Lord of Illusions (based on a Barker short story). It also doesn’t really feel like a horror story, despite the dark themes. I don’t know, even though there’s a lot of Pinhead action, including a long journey into hell itself, it never seems to have that creepiness to any of it and really feels more like a dark fantasy adventure. This is not to say that it’s a bad story, just a lot different than I expected.

I do feel that some of the dialogue in the later parts of the book, specifically the banter between the team that D’Amour ends up forming, got a little juvenile and over-edgy to the point that it was a little cringey. It kind of reminded me of the game Clive Barker’s Jericho now that I think of it. Kind of terrible character dialogue, but man did it have some great hellish baddies and environments. 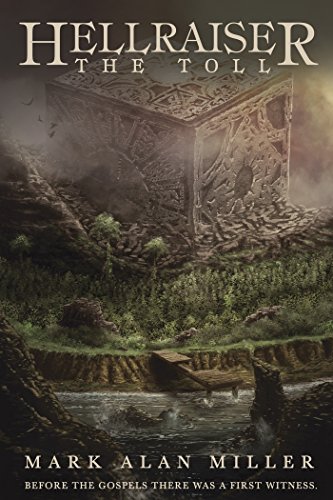 Basically just a short story, this one is written by Mark Alan Miller who works with Barker and has co-wrote a few comics with him. It tells a brief prequel tale of what Kirsty Cotton was up to before and during the events of The Scarlet Gospels. It’s a bit of a vestigial tale, not really adding much to the Hellraiser world one way or another and not having enough time to really dig deep enough into what it was trying to do, though it was written well enough. Maybe it will turn out to be important someday if the seeds The Scarlet Gospels planted ever bear fruit in a new official Hellraiser book, but it’s hard to say. Decent, but kind of skippable. 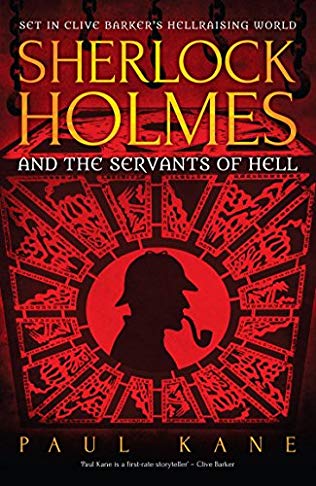 And then there’s the latest Hellraiser-themed book, and I can’t believe I’ve never heard of this, which is a crossover with Sherlock Holmes. I’m still not sure whether this book takes place in some alternate reality where the events of some of the Hellraiser movies happened back in Victorian London or if this was actually supposed to have happened before The Hellbound Heart and all these events like the business with the Cotton family just keep repeating over and over again through time, but either way the result is Holmes starting an investigation into mysterious puzzle box-related disappearances and deaths.

Unsurprisingly, this leads to Holmes and Watson getting wrapped up in the wild, wacky world of the cenobites and even winning a free trip to hell in the process. Like The Scarlet Gospels, this one’s also more of a horror-themed fantasy/adventure than a full-fledged horror story, but it’s actually a pretty good one and the two properties mesh together surprisingly well. Things get pretty bizarre in the later chapters too, and it all results in a very interesting and unexpected final conflict. Definitely worth a look for Hellraiser fans.

And that’s all, folks! At least until I find the time to go back and re-read all the various old Hellraiser comics again, which this has all given me quite the urge for!