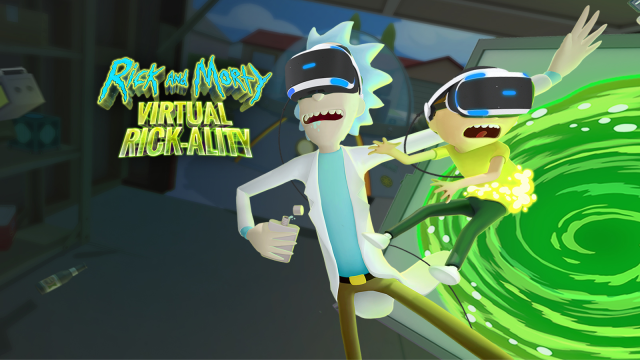 Assuming you don’t live in a cave, you’ve probably heard of Rick & Morty by now, and so you should have a pretty good idea what kind of humor to expect from a Rick & Morty game. It’s actually somewhat tame for a Rick & Morty adventure, but it definitely still has the same feeling about it.

This is yet another game developed by Owlchemy Labs, creators of Job Simulator and Virtual Accounting, both of which also featured guest appearances by the cast and creators of Rick & Morty. If you’ve played either of those then you also have a pretty good idea of what to expect here. It’s another similar VR game, with a high level of polish and detail, a ton of interactivity built into the environment, and some hilarious writing.

As an expendable Morty clone, you’ll be spending most of your time fiddling with various contraptions in Rick’s garage, and there’s a surprising amount of things to play around with in this small looking area. Every little shelf, cabinet, and other nook/cranny contains one or more objects with varying degrees of usefulness and comedic potential. You can shrink yourself down into a complex miniature battery recharging station, play around with random lab equipment which includes an item combining machine, or try to figure out how to reach that cassette tape out in the yard that’s within view, but way out of your reach.

Or you can actually follow the story and engage in the various puzzling, adventuring, and shooting that comes with a typically chaotic Rick & Morty adventure. While it’s another very short game, with an average time of around 2 hours, it felt like way longer to me because I became so engrossed in the well-crafted world and all the wacky things there are lying around.

My only real complaints here are that you need to be careful with this one because it requires a pretty generous range of standing movement (you might even work up a good sweat!) and the relatively large price tag. This is Owlchemy Labs’ most expensive game yet at $30, despite the fact that it’s roughly the same quality and length as their other games.

I waited for it to go on sale myself (big surprise there), but I am glad that I picked it up and I don’t even think I would have minded the full price so much after I’d played it, because it really is a top quality VR game, as well as being a genuinely funny Rick & Morty adventure.