Now we’ve arrived at a game so obscure that I can’t even find any good screenshots for it (I’d take my own if it weren’t on PS1). Echo Night already seems to be another relatively forgotten old From Software series as it is, but this second game in the series never even made it out of Japan. It was only somewhat recently that fans on the internet created a full English translation patch.

While Echo Night has some familiar old survival horror elements like a mysterious mansion full of puzzles, angry ghosts attacking you in the dark, and healing herbs, life or death situations are rare. This series is really more of an adventure, one where you have to explore a lot and perform menial tasks for needy ghosts. It sounds like it would be boring, but there are a lot of interesting mechanics and situations that keep things moving along at a decent enough pace.

The first thing you have to worry about in each area is how to get the damn lights on. Usually you enter a section and the power’s out, so you need to find the main junction box for the area and a key to unlock it. Once that’s done you can turn all the lights on in that section and stop the local angry ghost from chasing you around so you can start exploring more fully. 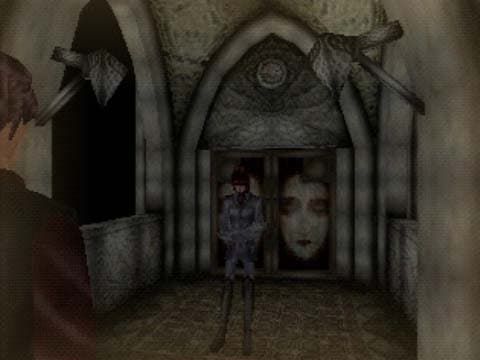 Oddly enough, the mansion is also home to many friendly ghosts, but those ones only appear once the lights are on. Once revealed, you’ll need to perform little side quests for them so they can give you a key item or just stop blocking the damn way to an important room. The interesting thing about these little side quests is that they usually involve you warping into the past to play out strange little scenes where you can find long lost items or change the course of history in favor of your ghost buddies.

Some ghost problems also have multiple solutions. You can take the quick, easy way which will let you get your key item and progress faster, but if you do so you’ll end up locking yourself out of a path that lets you free more ghosts and collect all of the astral shards you need to unlock the real ending. Unfortunately some of these shards are missable, with no way to return to them, as I angrily discovered when it turned out that I missed one damn ghost that prevented me from getting the good end. Oh well.

It’s still a fun enough game, more so than you’d expect for being so slow-paced and devoid of any real scares. It’s more for point-and-click adventure fans than survival horror fans though, that’s for sure. It’s worth checking out if you’re into weird old horror stuff.