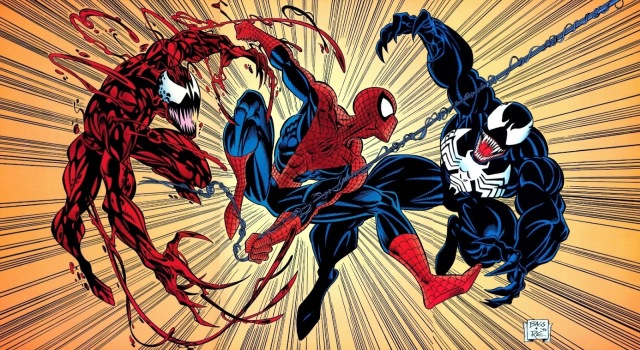 Well, things continue their downward spiral pretty quickly after The Clone Saga ends. While there are a handful of decent issues from DeMatteis and Mackie early on in this era, the majority of the run ranges from mediocre to awful and it just seems to get worse and worse. I’d recommend just skipping everything until the infamous Straczynski run begins.

The Best of Spider-Man Volumes 1-3

Anyway, this era of Spider-Man is quite a controversial one. Massive shake-ups and origin changes were a big thing back in the early 2000’s and this was one of the biggest examples. JMS made some pretty big changes to Spider-Man’s origins, introducing the possibility that his powers were actually partially mystical in nature and starting a long series of events that put Spider-Man up against mystical enemies on a regular basis. You would have almost thought it was a Dr. Strange book at times.

He also had Peter Parker become a science teacher. had Aunt May finally learn his secret, and had Spider-Man take time between giant mystical threats to deal with some issues closer to home like troubled students or criminals that he’d previously stopped who had served their time and were having trouble readjusting to their new lives, all of which led to some more big shifts in the typical Spider-Man story dynamic. 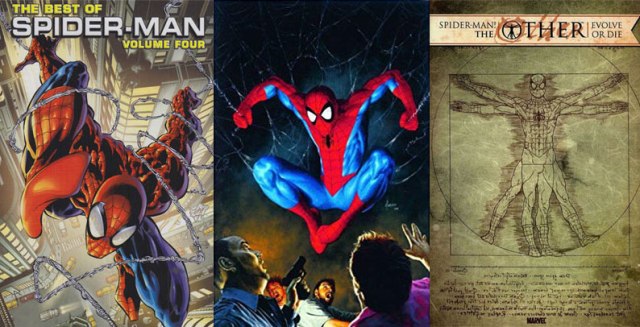 The Best of Spider-Man Volumes 4-5 and Spider-Man – The Other: Evolve or Die

It’s really quite a good run for the most part, but then it hits a point where JMS trying to top his previous controversial shake-ups collides with massive events and editorial mandates and things start to get a bit rocky. The Sins Past storyline, which involved some big changes to the history of Gwen Stacy, made some people quite mad. She was way before my time so I guess it never really bothered me.

Then there was The Other, a story that doubles down on the mystical spider-powers element and has Spider-Man get killed, but then immediately come back to life with even more spider-ific powers, including some goofy “stingers”, which were big spikes that appeared out of his wrists. Oddly enough, those things almost never appeared again afterwards. I don’t think any of this was all that bad though.

No, the real problem started when the infamous Civil War event happened and they let another writer have Spider-Man unmask himself on live TV just for shock value. I’m sure you can imagine how incredibly disruptive something like this would be to a character like Spider-Man. JMS tried his best to compensate and make it all make sense, but what can you do to recover from that kind of damage to a character? Not only is Spider-Man’s identity revealed to the whole world in an event book by another writer, but then an issue or two later he switches sides and becomes an outlaw with all his enemies, all his friends on the pro-registration side, and the whole US government out to get him, all happening so abruptly and sloppily, without a single thought given about the consequences this would have for the character.

Spider-Man was reduced to hiding his family in a seedy motel while the whole world was looking for them, Aunt May got sniped and was on death’s door, and Spider-Man became some grim vigilante that started resembling The Punisher. They all really painted him into a corner badly and it seemed like no one had any idea what they were supposed to do next. That’s when Joe Quesada, who was basically running Marvel at the time, stepped in personally and dictated what would become the most hated Spider-Man story of all time, One More Day.

It really is as bad as people say. I mean, I understand that something similar to this had to happen to get Spider-Man back on track again and it’s not the first time a hero has had weird superhero comic shenanigans occur in order to make their identity secret again (like Daredevil and Iron Man for example), but this was just so incredibly badly written and executed (and the art’s pretty awful too). Spider-Man becomes so desperate to save Aunt May’s life that he’ll literally try anything, leading to a bunch of really embarrassing encounters that culminate in him literally making a deal with the fucking devil where he “trades” his marriage for Aunt May’s life. It’s just such a shitty, painfully out of character way to have dealt with the situation.

JMS was very vocally against the whole thing and told everyone that listened that this dumpster fire wasn’t his idea, that Quesada came in and said that this was the way it was going to be because he wanted the happy old Spider-Man back (but not enough to stop Mark Millar from doing what he did in Civil War I guess?), and also decided screw it he wants Peter Parker to be single and poor again too. What a mess.

Luckily, after that abysmal little story, things actually did slowly begin to improve in the Brand New Day era and beyond, but that is a tale for another time. To be continued…