Well, this is one thing exciting enough to get me to post on here again. Jonathan Hickman’s revolutionary new X-Men relaunch has been divisive over the last few months, to say the least. Some people are angry about their favorite characters undergoing such drastic changes and acting so strangely, some are so 4D hyper-woke that they think that the cult-like and occasionally objectively and shockingly immoral actions taken by this new iteration of the X-Men are just a byproduct of an oppressed people embracing their culture, and some people are just plain confused by it all.

Others though, have been paying attention to the details and seeing what’s really going on behind the curtain here, which is only the beginning of a masterfully crafted time/space/dimension-spanning epic that stands to have disastrous consequences for not just the entire mutant race, but possibly the entire Marvel existence.

In this first of two posts, I’ll just be briefly talking about really going on Krakoa and what the future might bring for the X-Men.

Major spoilers ahead for all of House of X and Powers of X obviously. I’m also going to be assuming that anyone reading this has read the whole thing already and so I’ll be jumping back and forth across the timeline (which I can’t really help given all the connections that are hinted at earlier on, but not expanded on until much later).

Ok, so here’s what we know for sure:

Moira/Xavier are planning on resurrecting 10 million+ mutants over the next 10 or fewer years. In the process all of these minds will have to be contained within a single modern Cerebro device.

There are 5 Cerebro devices all keeping the same archive of mutant minds within them. Once a single machine contains a high enough number of minds in it, it collapses into a black hole, forming a Titan intelligence, which would potentially then go on to become part of a greater Stronghold or Dominion.

A Dominion is compared to a type of one-above-all God overseeing all existence.

The number of minds required to form a Titan is 10 million+.

The number of Titans required to form a Stronghold is around 5.

A Stronghold exists primarily to overthrow a currently ruling Dominion.

The only other known threats to a Dominion are cosmic entities such as Galactus and Phoenix. 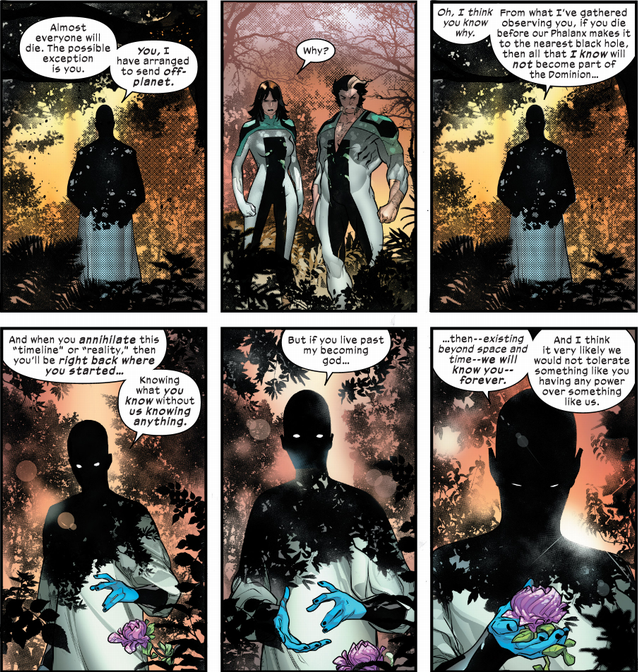 Moira knows about the Dominion and knows that it is a potential threat to her.

Moira goes to great lengths to remove threats to her continuing reincarnating existence.

Moira’s true goal is the creation of a mutant Dominion

The Dominion is the ultimate threat to Moira. It’s able to operate across space, time, and dimensions and if it ever learned of her it would know about her forever, even across lives, and most likely take steps to permanently destroy her.

This very much mirrors Moira’s early encounter with Destiny, where she was told that Destiny would remember her across lives and hunt her down and destroy her every time if she didn’t start helping mutants. This also puts her motives for helping mutants under a lot of suspicion since it was only born through coercion, but we can’t say for sure whether she actually cares about mutants at all or if this is all just about her own survival.

The point is though, is that helping mutants survive in this life isn’t the real end goal. Moira is working towards building her own Stronghold in order to overthrow the Dominion, because this is the only possible way for her to avoid being eventually destroyed by it.

All steps taken to buy time while their mutant nation grows, and while everyone is looking at the physical growth of the mutant nation, no one will be stopping to think about the ramifications of the mind archive.

I have no doubt in my mind that this is what Moira is trying to accomplish, given the evidence (and am frankly kind of shocked that so few people seem to see it), but one thing I can’t say for certain is exactly why she’s trying to form this new Dominion.

Is it really all for the benefit of mutants in the long term or is this really all just about her own personal survival? It would seem that precogs and the Dominion are the only things stopping her from reincarnating endlessly, but you could just as easily argue that overwriting the current Dominion with a mutant one is the only way for mutants to ever truly win.

Her secrecy and ruthlessness initially made me suspect that her motives weren’t as innocent as simply helping mutants, but…this could be explained by the fact that this plan of hers might be even more far-reaching than it seems. More on that in a minute though.

Where does the Phoenix come into this?

The threats to Moira keep escalating, so what happens if she achieves her goal? There’s always a bigger fish, right? Well, Moira has been collecting and cataloging high-powered reality-altering mutants. Phoenix is just an extra powerful reality-alterer at the end of the day. The perfect defense to a cosmic threat like that would be a whole collection of similarly powered reality-alterers.

I don’t think it’s a coincidence that this all began soon after the Phoenix was disconnected from Jean Grey and banished from Earth once again either.

It’s also very possible that the Jean we’re seeing, who seems so oddly young, inexperienced, weak (in terms of power), and using an oddly outdated costume/codename, has been resurrected from a pre-Phoenix backup. After all, this costume and codename are the same ones she was using right before she became connected to the Phoenix for the first time. 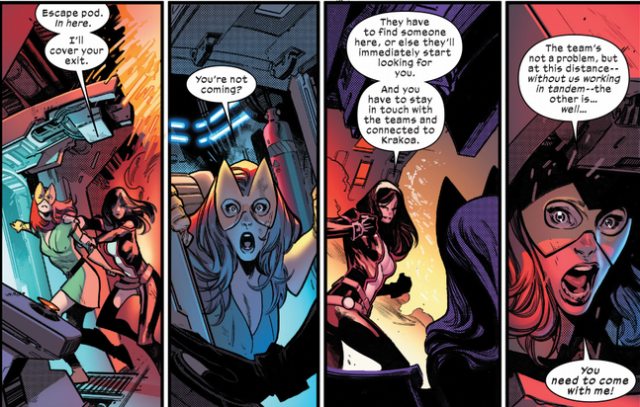 Sure seems like she’s already taking length steps to prevent this though.

How does Sinister play into all of this?

Still too early to say on this. Sinister is definitely playing his own game here, and is sure to start working against Moira (openly) at some point, but as usual, we don’t really know why.

He could be secretly tied to the lesser machines like Nimrod. He could be secretly tied to the Dominion. He could even just be a wild card third faction with his own goals that are separate from all known parties. The only thing we know for sure is that he’s got his own motives, which aren’t as controlled by Xavier as Xavier thinks, and that he’ll inevitably betray them all for some reason at some point.

So what’s next for mutants? 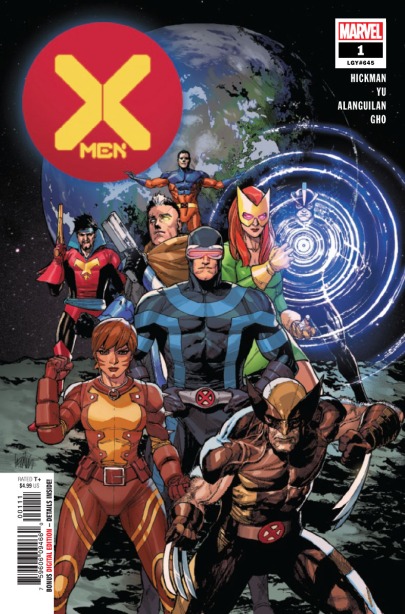 Well, aside from the obvious relaunching of the X-Men line under the Dawn of X banner starting tomorrow, it seems that it will be quite some time before we learn the full truth of it all. Here’s what I think will happen in the broad sense over the next five years or so though:

When we get closer to the end of this era there will be another time jump, similar to Time Runs Out in Hickman’s Avengers run, where we see what happens years from now (in comic time) when the Stronghold is finally almost complete. At this point people are going to have caught on to what she’s trying to do and realize that it will probably result in the end of Earth, and possibly many other worlds as well, and try to stop her.

They won’t succeed though. Whether it’s all about her survival or the survival of mutants, Moira will replace the existing Dominion with a mutant one. After this is accomplished, the collateral damage won’t really matter, because Moira will die again (probably by her own hand), and everything will be washed away as her 11th and final life begins.

You’re probably thinking “oh great, so that erases this entire run and none of it even mattered wahhhhh!”, and to some extent this will be true. Everything we’ve seen here will be rolled back. No more weirdo Xavier. No more Krakoa cult and suicide clones. No more official mutant nation. On the other hand though, the Dominion ruling over all existence is now made up of mutant minds instead of purely machine ones and anti-mutant post-humans and etc and it will stay that way even when everything else resets.

I have a feeling that this will result in a massive shift in how people in the Marvel universe look at mutants. Suddenly the seemingly irrational hatred of mutants while accepting all other powered humans will largely disappear. Oh there will still be some people that hate them, because there’s always someone out there irrationally hating some group, but it won’t be as widespread as it is now and it won’t be the primary driving force of mutant stories.

If this is the case, then it’s also possible that life for mutants in the present day might drastically change to reflect an existence free of the manipulations of people like Moira, Sinister, would-be post-humans, and others. A happier, healthier X-Men that hasn’t been so strongly shaped by death and hatred and leans more towards being the superheroes we always knew they were, but couldn’t publicly operate as very well. It would certainly also be very fitting and well-timed for a real world that at this point will be close to having an all new MCU version of the X-Men.

Unfortunately for Moira, to seal the deal here she’ll probably have to kill herself again early on in her 11th life so that her powers and knowledge can’t be exploited by anyone else. RIP Moira!

Anyway, that’s my prediction. Just remember all I said here in five years or so when this all ends!