Oh Marvel Puzzle Quest. How much time and money did I sink into you over the last almost two years? How much?!? Too much, that’s how much. I honestly don’t even know how much time I was spending per day on this damn game. An hour? Two? More than I realized, I’m sure, even though I’d cut down from how much I used to play by giving up on the PVE part of the game entirely. 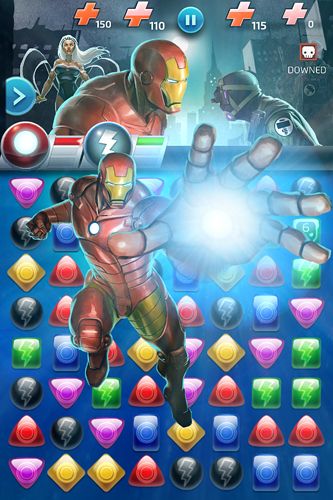 Right, so…this is a puzzle game obviously. Match the colors, build up energy to use character specific powers and puzzle your opponent to death. This primarily happens in two forms, PVP tournaments and PVE tournaments. Ironically, you aren’t actually playing against real people in the PVP, but AI controlled instances of the teams real people are using, and you aren’t really up against the AI in the PVE, well you are in your battles, but your rank, which determines your reward, is based on how well your score matches up to all the other real players you’re competing against. In other words, you’re constantly fighting uphill against the constantly rising points of other players and/or the attacks of other players whittling away at the points you’ve already made. Unless of course you buy a shield! Shields can be bought with Hero Points, which are exactly what you’re probably already suspecting them to be. It’s a rare in-game currency that you get very little of, but is essential to almost everything in the game.