After getting a new (or at least one that’s in working order) Playstation 2, I’ve been dusting off the old pile of PS2 games and thought I’d give some of the older, more obscure Resident Evil games a try again. No one really talks about Outbreak much (though the 2nd one seems semi-popular). I had a hard time even finding a decent screenshot of it (and it’s still not very good). 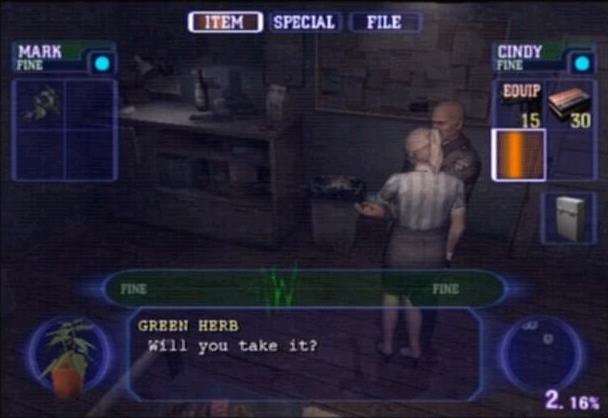 Outbreak was the first attempt at an online multiplayer-based Resident Evil, long before awful games like Operation Raccoon City and Umbrella Corps came around. Like those games, it does have a single player mode, but wasn’t really made with single player in mind, so the experience is pretty flawed and uneven. I can see this being a lot more fun with real people and the difficulty turned up, but even then, it’s a bit of a mess. The extremely limited inventory size forces you to co-operate, even in single player. You have to use AI companions as a kind of living storage box, and really, that’s all they’re even good for. They sure as hell won’t fight or help you in any way. Left to their own devices they’ll blindly stumble around, literally filling their inventory up with sticks and other useless items or even stand right next to you and watch you die as you’re screaming at them for help sometimes.

On the surface it’s a pretty standard old-timey Resident Evil kind of game, with a lot of familiar monsters, inventory management, and a ton of weird puzzles and backtracking, but the more you dig into it, the more it feels like a cheap copy. There’s a random splattering of story cutscenes, but they’re near-incoherent and the 5 scenarios you can select to play don’t seem to have any real connection to each other. The enemies and bosses feel kind of like bargain bin versions of ones you’ve already seen before, with textures and animations that don’t seem quite finished.

It’s not ALL bad. There’s the level where this weird unkillable leech man keeps popping out of vents and doors and chasing you around and you can only throw blood packs to distract him until you find a way to kill him near the end of the level, and there’s the part where the “Tyrant”, or this game’s version of one, called Thanatos (who is now a big black dude in a speedo for some reason), is chasing you around a mansion. Those parts were actually pretty tense and fun. Overall though, it’s a pretty mediocre game. I wouldn’t recommend it to anyone but the biggest Resident Evil fans who want to try everything (I think I would rather play Survivor again than this). Supposedly the sequel is a lot better. It’s been so long that I really don’t remember, but I guess we’ll see…